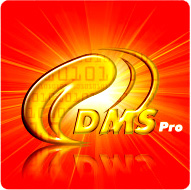 Digital Meridian System.
Healthy meridian is the cornerstone of overall wellbeing. Qi and Blood analysis, Ying & Yang analysis and the way to keep in good health start from here.

Perfect combination of traditional meridian theory and modern energy medicine, Provides you with an integrated plan for test, diagnosis, syndrome differentiation, food therapy, treatment and health monitoring. Design based on the decades of professional research by experts in the field. Using the advanced network platform (supported by a database of clinical records), it increases the accuracy to greater than 90%. 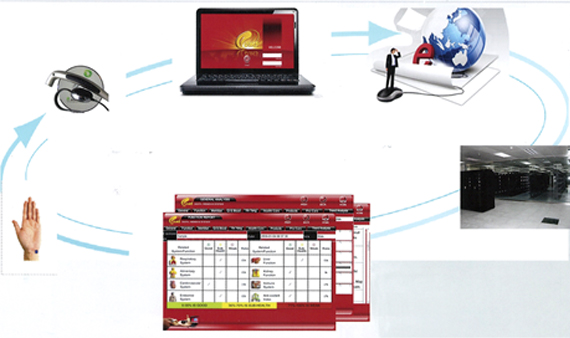 Chinese Medicine Clinic, Naturopathic Clinic, Health Care Center
This system will accurately and objectively provide the status of 12 human meridian systems, along with the information in regards to the wellbeing of the internal organs. Based on the syndrome differentiation results of the diagnostic system and the experience of doctors, it generates accurate data and scientific conclusions. Doctors therefore can perform more patient specific treatments yielding better results.

General Families
It is useful for people to understand the health status of themselves and their family members so that they can choose the appropriate diet and health plan. Subsequent test s can be made to track changes and improvements in health. People can use this system to predict, prevent, and pre-treat potential illnesses and to remain healthy. 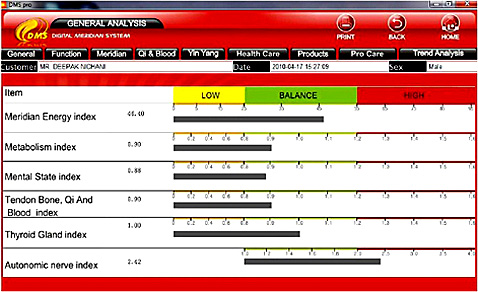 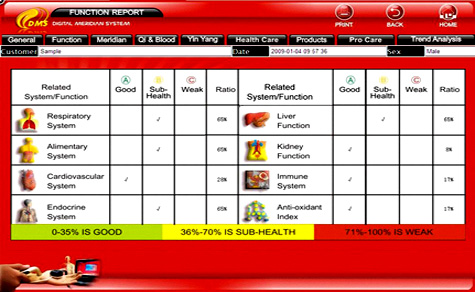 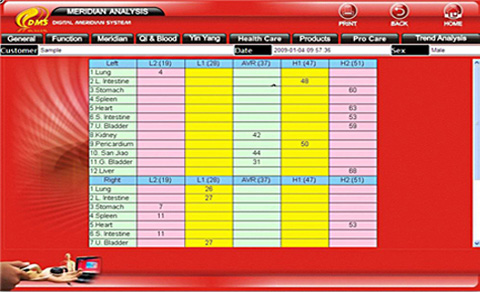 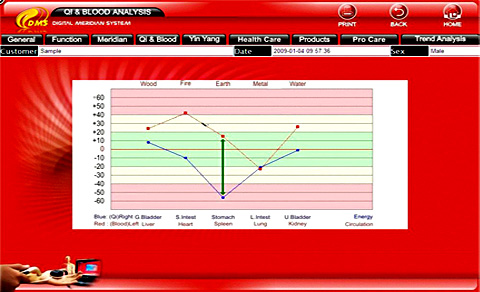 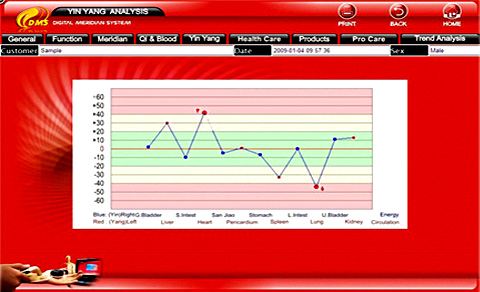 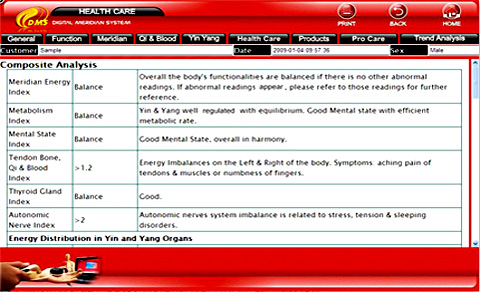 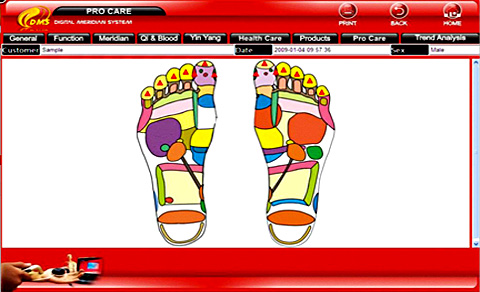 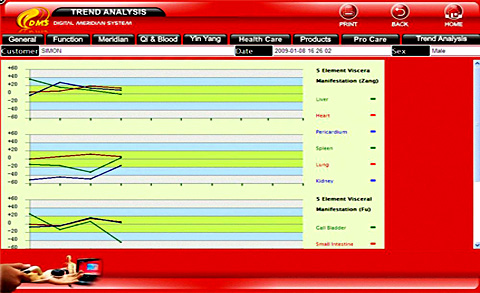 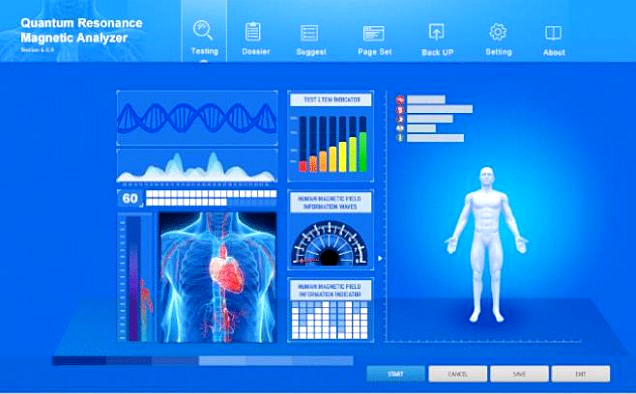 The human body is the aggregates of a large number of cells which are in continuous growth, development, differentiation, regeneration and apoptosis, and the cells constantly self-renew through its own division. 25 million cells are divided at one second in an adult’s body, and the body’s blood cells constantly renew at the rate of about 100 million per minute. In the process of cell division and growth, those charged bodies of atomic nucleuses constituting atoms as the basic unit of cell and the electrons outside the nucleus are in constant high-speed movement and changing, thereby constantly emitting electromagnetic waves.

Quantum medicine considers that the most fundamental reason of falling sick is that the spin of electrons outside the atomic nucleus and the orbit change, thereby causing the change of atoms constituting a material, the change of small biomolecules, the change of big biomolecules, the change of all the cells and finally the change of organs. Because the electron is a charged body, when the spin of electrons outside the atomic nucleus and the orbit change, the electromagnetic wave emitted by the atoms will change. The energy of the electromagnetic wave changes caused by the changes of the human body’s diseases and physical changes in the nutritional status is extremely weak and usually is only nano gauss to microgauss. The frequency and energy of the weak magnetic field of hair determined directly or by holding a sensor by hand compare with the resonance spectra of standard quantum of diseases and nutrition indicators set in the instrument after the frequency and energy are amplified by the instrument and processed by the computer, and then the corresponding quantum value being from negative to positive is output. The size of the quantum value indicates the nature and extend of the disease and the nutrition levels. Finally, the test results are resolved by clinicans. For example, cancer cells are different from normal cells, and the electromagnetic waves emitted by cancer cells are also different from the electromagnetic waves emitted by normal cells. Quantum resonance testing rumor is to send the standard wave of cancer cells to the specimen. If there are cancer cells in the human body, resonance will occur, and the instrument will detect the signal. The more the number of cancer cells is, the more intense the signals is, and the quantum value tends to the negative value. If there are no cancer cells, resonance will do not occur, and the quantum value tends to the positive value. It’s similar to the principle of listening to broadcasting from the radio. There are many radio waves in the air. If you want to listen to some designated broadcasting, you can transfer the radio to the the corresponding frequency, at this moment, resonance occurs, so that you can listen to this broadcasting. Quantum resonance uses this principle for testing. 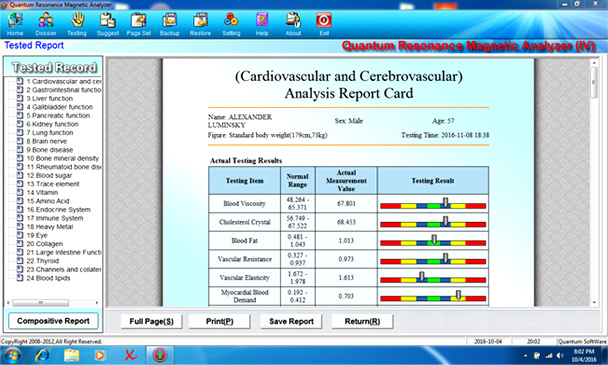 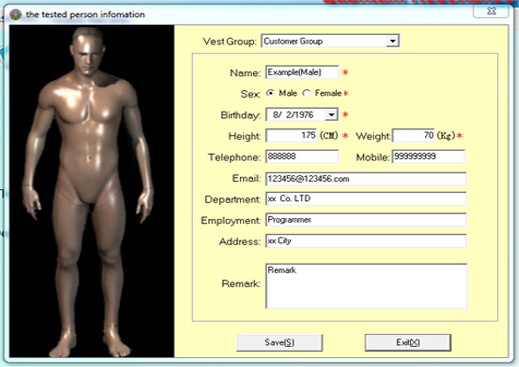 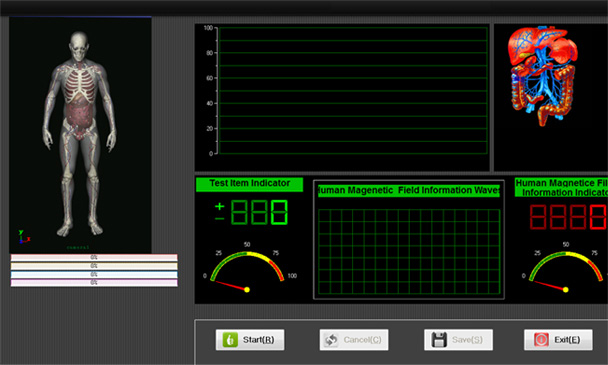 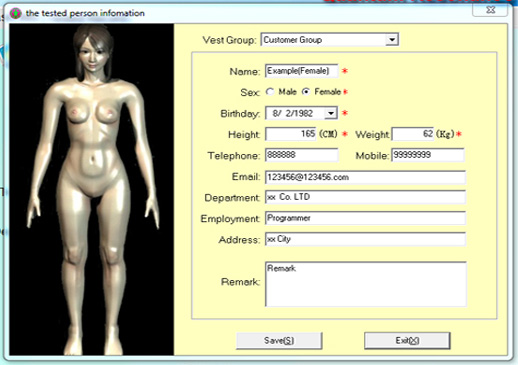